It took me a long time to feel a coaching impulse in these difficult times of the pandemic. The time was not yet right.

As I already described last week in podcast episode #34, I currently have a lot to nibble on myself. But I'm slowly coming out of shock, creating new routines in my home office, making my zoom conferences more efficient and networking with Likeminds almost as I used to do at regular intervals.

From the panic zone to growth

There is a diagram of what is currently being shared on the internet, unfortunately even after extensive searching I could not find a source. It's the depiction of three phases and the question, "What kind of person do you want to be in times of Covid-19?" It's a rather pathetic question, but there is some truth in it. If I remember the story of the times of crisis that my grandfather gave me surviving World War II, we are doing comparatively ok. Even if war cannot be compared to the Corona crisis, the question is; how do we manage to deal with the limitations and fear associated with the spread of an invisible enemy that can kill?

The following diagram shows very well how strongly our own worries, fears and the constant circling of thoughts around them can influence us. After three weeks of social distancing and #westayhome, it is time to question our thinking and behaviour. Here is the diagram 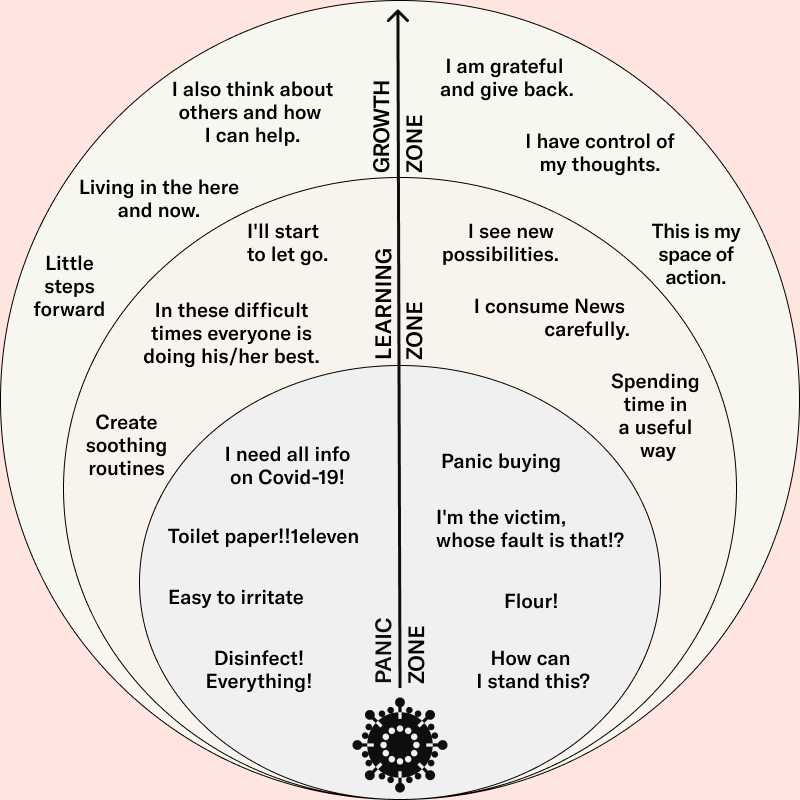 First we find ourselves in a crisis in a state of ascending fear, which can escalate to panic. For me, this was the shock of the abrupt loss of my biggest project and the associated financial loss, which was very unpleasant, especially given the uncertainty about the state of the current economy. With people, this kind of existential fear of loss and quite simply the fear of dying leads to hoarding, excessive demands, the urge to consume all messages and many inner dialogues: "How am I going to stand this?" After initial panic, people in this zone may tend to blame others and see themselves as victims: "I am the victim, who is to blame!" This phase must be left behind as quickly as possible.

After I had really read all the news, talk shows and scientific articles about pandemics and the basic reproduction number R0, I only consumed targeted news or none at all. The one or other speech and important for me as a Solopreneur: all the information about Corona emergency aid. I began again to use my time wisely, to plan and reintroduced my routines like yoga in the morning and good home cooked food. People in the learning zone manage the urge to give up control and let go a little further. "In these difficult times, everyone is doing their best." This is a thought, which again creates connection among each other. New possibilities are seen again.

The last zone is about using the newly found courage and growing with it. For me, the growth phase started last week when the Corona emergency aid arrived on my account. I felt a real relief and found new strength and energy to continue. With the spontaneous idea, to sew facemasks for the circle of friends and the family and thereby supporting the project for Berlin homeless people by bUm, I finally escaped from the negative maelstrom of panic. People in the growth zone take control of their thoughts and recognize their own scope of action. It is about taking small steps forward and living in the here and now.

And? Am I cured now? No more fear? No, I don't think so. I think there will be relapses to the lower zones. But this instructive experience has once again taken me a little further, strengthened me and also connected me with people who have also fought their way out. This gives you courage, even for imminent battles. Good luck with that!